The art of Gary Skinner 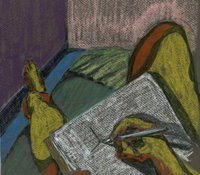 Art lovers should check out the art of Garry Skinner, who posts his latest projects to his blog, The Artwork of Gary Skinner. His artwork is mostly about Capitol Hill and his friends.
Posted by Anonymous at 12:28 PM No comments:

The Christian Coalition spoke at a forum on indecent in the entertainment industry before the Senate Commerce Committee, according to the Associated Press. The all day forum included over 20 speakers who represented government, public-interest and entertainment industry interests. I would guess that the anti-Gay Christian Coalition would consider any show or movie that portrayed Gay people in a positive light to be indecent.
Posted by Anonymous at 12:28 PM No comments:

Thousands of people around the world and in our own backyard continue to suffer from the devastating effects of HIV/AIDS. Now is is not the time to become complacent. Check out the SGN's listings of World AIDS Day events for opportunities to get involved. More.
Posted by Anonymous at 5:29 PM No comments:

Out and Proud Inc. (formerly the Seattle Pride Committee) has announced plans to move the Pride Parade and Festival to downtown/Seattle Center. The SGN is interested in hearing what you think, so, we started a poll. Visit www.sgn.org to cast your vote.
Posted by Anonymous at 5:15 PM No comments:

This came across the PR wire:

FARMINGTON, NM -- The American Civil Liberties Union and other civil rights groups are protesting an essay contest at Farmington's Piedra Vista High School that asked students to explain why preserving marriage between men and women is vital society and why unborn children merit respect and protection.

The ACLU of New Mexico, Equality New Mexico, and NARAL Pro-Choice New Mexico said the contest violates state regulations banning sexual orientation discrimination by teachers. They also object to the ideological slant of such an assignment.

Why am I not more shocked! During my years at the SGN, I have seen a ideological shift in this country. SCARY!!
Posted by Anonymous at 3:34 PM No comments:

I have 13 words for you. Don't let the door hit your backside on the way out the door.

The Seattle Gay News has written extensively about you over the years, including just a couple weeks before the world would come to hear about your double life. Each article reported that you where a foe of LGBT equality.

The Seattle Times recently wrote a feature titled, "Even the mayor wonders: Who is the real Jim West?" The paper asks "...which West will voters have in mind when they decide whether to dump the first-term mayor?":

The professional politician who was leading the city to a long-overdue renaissance?

Or "therightbi-guy," one of the names the mayor used while cruising online for young men? Or darker still, the former sheriff's deputy and Boy Scout leader who stands accused of molesting young boys decades ago?

Yours Truly,
Robert Raketty
Posted by Anonymous at 12:55 PM No comments: