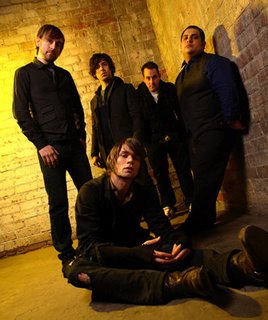 Both groups are listed this week in Billboard's top 100 albums chart, Taking Back Sunday's gold-certified "Louder Now" is #57 and Guster's just-released "Ganging Up on the Sun" debuted impressively at #25. Separately, Taking Back Sunday and Guster are now on multi-city summer tours across the US. Check your local concert listings for dates in your area.

Our interviews with Matt Rubano of Taking Back Sunday and Ryan Miller of Guster will appear in separate issues of the Seattle Gay News in July. Visit "The Music Lounge" weekly column for specific interview print dates and for information on other buzz-heavy artists and new CDs.

Photo of Taking Back Sunday, courtesy of artist's official site.
Posted by albert from SGN at 7:25 PM No comments:

On behalf of the entire staff of the Seattle Gay News, I wish you the happiest of Pride celebrations ever!

For Downtown Pride info: Click here!
Posted by Anonymous at 12:53 PM No comments: 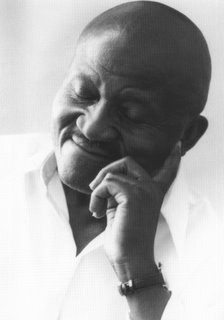 Bey, a Grammy-nominated pianist-vocalist and out musician, will perform back to back nights at the jazz club with band members Paul Meyers (guitar), Kiyoshi Kitagawa (bass) and Vito Lesczak (drums). Set times for both nights is 7:30pm.

We're very honored at Seattle Gay News to support Andy Bey, one of jazz's finest vocalists who has graced the stage with Sarah Vaughan, Dinah Washington and Lena Horne, to name a few. In 2005, Bey shared highlights from his career and his openness to the gay community with our readership.

SGN A & E Writer Lorelei Quenzer's preview for the Andy Bey Quartet aopears in this week's issue of the Seattle Gay News.

Posted by albert from SGN at 8:16 PM No comments: 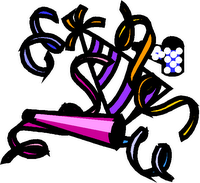 A celebration is to be held on Wednesday to recognize the efforts of Washington Won't Discriminate and its countless supporters who sought to defeat Referendum 65.

Referendum 65 failed to quality for the ballot earlier today (see post below).

(Seattle, WA) – Today Tim Eyman, The Christian Coalition, the Faith & Freedom Network and Concerned Women of America announced they were not successful in collecting the 112,440 valid signatures needed to qualify Referendum 65 for the November ballot. Signatures on the referendum were required to be received by the Washington Secretary of State by 5 p.m. today in order to qualify the measure for the November ballot.

"The failure of Eyman and the fundamentalist networks to collect enough signatures after three months of trying is a credit to the people of Washington state. Washingtonians made it clear they do not want to go back to the days when it was legal in our state to fire someone or deny them housing simply because of their sexual orientation," said Anne Levinson, Chair of the Washington Won't Discriminate Campaign, the organization leading the fight to keep the anti-discrimination law.

"Our campaign was just getting started and already more than 5,000 people and hundreds of religious organizations, businesses and community groups from around the state had publicly taken a stand in support of keeping the law. I've been involved in many campaigns over the years, and I have never seen an outpouring of support as we have received for making sure the law against discrimination remains the law in our state," Levinson added.

"Tomorrow, thousands of people will be able to go to work in towns across Washington without fear of being fired because of their sexual orientation," said John Vezina, Washington Won’t Discriminate campaign manager.

"A great deal of effort went into collecting signatures based on a mistaken assumption by the proponents that the people of the state didn't support the anti-discrimination law. To not get enough signatures for a referendum – only half as many are needed as for an initiative – makes a strong statement that the proponents of the referendum do not represent the vast majority of Washingtonians," added Vezina.

To view the list of endorsers, see below or visit the Washington Won't Discriminate website: www.washingtonwontdiscriminate.org
Posted by Anonymous at 9:20 PM No comments: 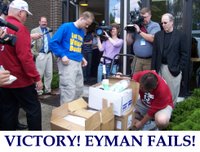 Apparently the 'force' was not with Tim Eyman, who failed to turn in the necessary signatures to put Referendum 65 on the ballot. Therefore Washington's new law barring discrimination based on sexual orientation and gender identity will go into affect tomorrow.

"Tomorrow will be a proud day in Washington," said Governor Christine Gregoire, in a written statement. "In January, Washington took an affirmative stand to say to gay and lesbian individuals, moms and dads, sons and daughters, neighbors, co-workers and friends that, like all other people, they are free to work in an environment absent [of] discrimination. Tomorrow our words become law."

Eyman appeared at the Secretary of State's election office on Monday dressed in a Darth Vader outfit, but donned more humble attire when he made the announcement earlier today that the referendum's backers had failed. According to Eyman, 105,103 signatures had been collected, far short of the 112,440 signatures needed to qualify for the fall ballot.

The defeat was not only a blow to Eyman, who has made a career out of backing ballot measures, but to the network of conservative organizations, evangelical churches and radio stations who had backed the effort.

"This is a set back," said Gary Randall, President of the Faith & Freedom Network, an anti-Gay conservative organization in Washington State.

Representatives from other conservative organizations, such as the state chapter of the Christian Coalition and Restore America, an Oregon based conservative organization seeking to "mobilize and empower America's Christians in directing the moral, educational and political course of their state," were also present. Concerned Women of America, the Eagle Forum and Sound the Alarm were also thanked by Eyman for their efforts.

Randall said that his group may be back with an Initiative to the Legislature, which would require even more signatures than a referendum. Eyman's future participation seemed doubtful.

Photos courtesy of the Northwest Progressive Institute
Posted by Anonymous at 9:03 PM No comments: 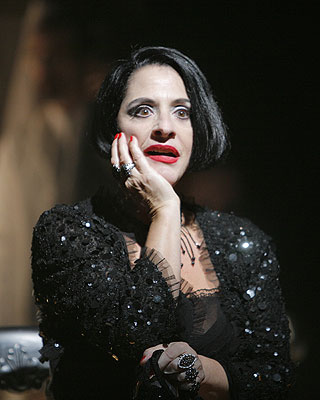 Hello again, It's Spencer with some thoughts on one the tightest races in the 60th Annual Tony Awards, BEST REVIVAL OF A MUSICAL.

THREE PENNY is a dark satire of ' respectable society ' and features some of the most interesting characters on the current Broadway stage. However, a long B'way run does not seem likely. Disappointing reviews have crippled the box office. Critics claimed the production was miscast and over the top, and several of the 'stars' of the show have missed multiple performances due to the highly demanding score sung eight times a week. This show will need a Tony if it is to make through the summer.

Also considered in the 'dark' category is Stephen Sondheim's SWEENEY TODD. Directed by John Doyle, this new incarnation reinvigorates the monumental opera first seen on Broadway in 1979. Patti LuPone, the grand diva, has captured herself a Tony nomination for her work as Mrs. Lovett. And what makes this SWEENEY so different is what it has not, an orchestra. Instead, the actors comprise the band. In my opinion, this robs some of thunder of the score's grand operatic themes. But audiences don't seem to mind, making this one of the few profit turning Sondheim shows in recent memory. I'm predicting a Tony or two for this tuner.

Then, there's THE PAJAMA GAME. Just try getting a ticket to this one is a task! SGN's own Milton Hamlin snared a ticket and loved it. So does just about everyone else pouring out of this limited run. First opening in 1954, this beloved community theatre staple has been spectacularly revived starring Harry Connick Jr.

Connick is the front runner for Best Actor in a Musical. He can start rehearsing his acceptance speech now. But he is leaving the show to tour. Although they will remount the show this fall, sans Harry. Of course much of the buzz is due the finale when Connick appears topless, much to the ladies ( and boys ) delight. I'm guessing we behold such a sight on the Tony tele-cast.
THE PAJAMA GAME is everything the previous nominees are not. Light, bubbly, simple stock characters and easy listening score. And dance. Lot's of dance. Director Kathleen Marshall has wisley not shied away from Bob Fosse's original choreography. But she has put her own stamp on the production and created a monster hit. Look for this to take the Tony for Best Revival.

So these are a few thoughts for one of the categories this year. If you have any thoughts or comments, feel free to post them. Look for a Tony Awards preview in the SGN's June 9 issue.

Photo of Patti Lupone, courtesy of official production site and taken by Paul Kolnik.
Posted by Spencer at 3:27 PM No comments: