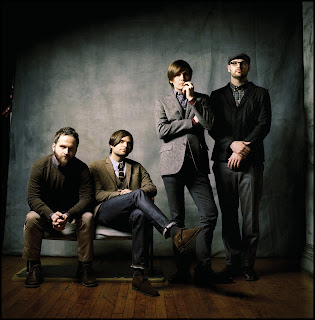 We had them, twice. And by "had" we mean interviewed.

Death Cab for Cutie, the multiple Grammy-nominated Seattle band, has interviewed with Seattle Gay News for a second time. Six years ago, Nick Harmer (bassist) and Chris Walla (guitarist) exclusively spoke with us for our "Best of Music 2005" spread.

This time around, we snagged drummer Jason McGerr for a one-on-one.

Look for McGerr's interview in tomorrow's print edition of the Seattle Gay News (October 21 issue), which goes online the next day at www.sgn.org. Death Cab for Cutie performs Saturday, October 22 in front of a hometown crowd at Key Arena.
Posted by albert from SGN at 12:45 PM 3 comments: