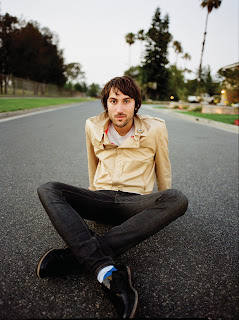 Acclaimed singer-songwriter Matt Costa interviews with Seattle Gay News in our May 23 issue, two days before he performs on the Sasquatch Music Festival's main stage.
The Southern California native tells us what he stocks his tour bus with, who his BGF (Best Gay Friend) is, and he even gets a bit sentimental on us.
Costa's new album Unfamiliar Faces is a knockout, featuring the standouts "Mr. Pitiful" and "Trying to Lose My Mind". Watch his quirky, San Francisco-set music video for "Mr. Pitiful" here: http://youtube.com/watch?v=XR8ZRfDPosE. Currently on tour, he's shared the stage with Jack Johnson and appeared in concert venues around the world, including Australia, Japan, Europe, and throughout the US.
Grab a copy of Seattle Gay News on Friday or over the holiday weekend, and get familiar with the talented, handsome, big-footed, and quite loveable Matt Costa.
Posted by albert from SGN at 1:00 PM No comments: 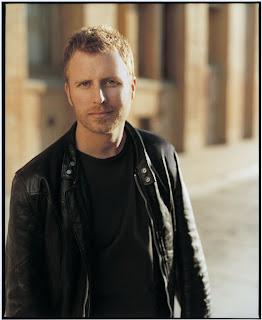 It's Albert from Seattle Gay News, in Los Angeles where it's been a blistering 100-degrees the past two days! Thankfully, my hotel (Le Montrose) has a rooftop pool to cool off at.
Last night I met up with Matt Costa for a drink before he went onstage for a sold out show at the El Rey Theatre, and then saw him backstage after the show. Sweet guy, and an amazing concert! If you never seen him before live, make it a point to do so. On Friday night, I saw a local metal band named Rattlehead at Whiskey-a-G0-Go, and I was really impressed. They rocked!
Speaking of rocked, country hunk Dierks Bentley let loose Thursday night on Jimmy Kimmel's outdoor stage, performing five songs before jetting to Atlanta.
Our E-tickets told us to arrive by 6:15 at El Capitan Theatre in the Hollywood district, directly across the street from the Kodak Theatre (home of the Academy Awards). Some of us waited in front of the theatre and were told 45 minutes later that we needed to go to a parking lot on the backside of the theatre, which we did. Then, we had to stand in line for another 45 minutes with no shade, in about 80-degree weather. Finally, they allowed us into the outdoor concert area - and we were so thirsty, but they had no water bottles, no water fountain, and quite frankly no bathrooms. So remember this, if you ever get tickets for a Kimmel outdoor show.
Inside the concert stage area, we watched the show being taped live on a giant-ass flat screen TV behind the drumset - so we waited for another 45 minutes through Kimmel's monologue, Josh Halloway (from Lost), and an idiot claiming to be a human Google (wasn't Nicole Ritchie available?). Finally, Dierks Bentley appeared onstage with his band - their backsides to us, and then turned around and played "Sweet & Child" with a pretty girl who joined in as Bentley's duet partner.
After the first song, Bentley and his band went right into the next song, which I think was "Trying to Stop Your Leaving". He looked great, and obviously had a touch-up between Wednesday's appearance in Seattle and Kimmel - his hair looked as if it was trimmed overnight; nicely groomed. Bentley wore form-fitting jeans and a charcoal short-sleeve shirt. The crowd was awesome, they knew all the words to his songs and clapped along enthusiastically.
Bentley performed "Settle for a Slowdown", which was not played in Seattle and I really wanted to hear it, so I was ecstatic to hear it performed live. If I remember correctly, "Lot of Leavin' Left to Do" was also performed.
Just before wrapping up his set, he told the audience he would take recommendations for a nearby bar to go to before heading to the airport. But he didn't bring it up again after completing his mini show. He did, however, jump down and autograph a fan's shirt that apparently has a bunch of country artist signatures and lacked Bentley's, and then he shook the hands of fans in the front row before jumping backstage and disappearing.
Five songs flew by fast, considering we waited for over two hours (some people waited all afternoon). But it was something unique and crazy - to see a big artist like this with the Roosevelt Hotel off to the left and the Hollwood hills behind us, and great big blue sky above. I thought for sure "What Was I Thinkin'" would be played, as did others in attendance, but that wish just didn't come through. All in all, Dierks Bentley really rocked that stage - and I'm told some artists perform their two taped songs, then take off - but he stuck around and played five.
Posted by albert from SGN at 5:08 PM No comments: 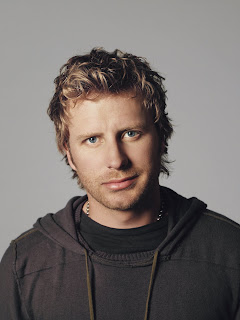 Seattle Gay News is serving up a double-shot of Dierks Bentley this weekend, two back-to-back exclusives from Seattle and Los Angeles.
Yesterday afternoon, I was among a select group of invite-only guests who attended the country star's intimate show at Qwest Field's FSN Lounge. And this evening, I was in the crowd as the multi Grammy nominee performed on Jimmy Kimmel's outdoor stage. In fact, after an 80-plus-degree day here, shuttling to the El Capitain Theatre (across the street from the Kodak Theatre, home of the Oscars), and gulping down a much needed In & Out burger, I'm rather pooped and going to bed to save my energy for tomorrow night and for Saturday when I meet up with Matt Costa.
In tomorrow's print issue of Seattle Gay News, look for a review of Bentley's VIP performance and check back here on Saturday for a mini blog review of his appearance on Kimmel.
Lastly, you must fly Virgin America when visiting the LA area because they've got the best entertainment system of any airline - it's like traveling with a jukebox and portable TV. And, when in West Hollywood, stay at Le Montrose - tucked into a quiet residential area, blocks from all the gay action, and popular with many celebs.
Posted by albert from SGN at 10:04 PM No comments: 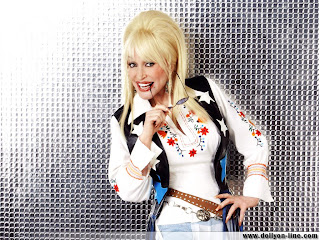 Country legend Dolly Parton is coming to Seattle this summer and Seattle Gay News has the scoop. The show hasn't been officially announced yet, but we got special permission to announce it exclusively in our May 2 issue.
Grab a print copy of our latest issue, or click below for details: http://sgn.org/sgnnews36_18/page38.cfm
See you at the show. Yee-haw!
Posted by albert from SGN at 4:32 PM No comments: