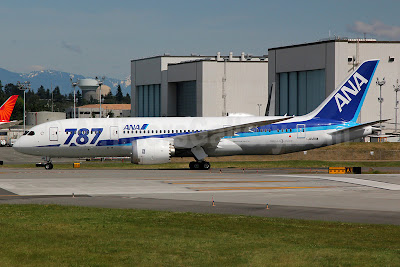 It's the beginning of something very exciting, and we're on board to capture all the action!

Seattle Gay News joins a small press corps today for an experience aboard All Nippon Airways' inaugural Seattle-to-Tokyo 787 flight.  The Japanese-based airline launched non-stop service between the two cities in July, but has been utilizing a 777 aircraft for the 10.5 hour flight (outbound, from Seattle).  At 1:15pm this afternoon, ANA will send its first passengers to Tokyo on a 787 "Dreamliner", which is mostly made of carbon fiber and other composite materials.  ANA is the first airline to receive and put the "Dreamliner" into active service.

Look for a review of the flight experience in an upcoming issue of Seattle Gay News, which this year has published feature destinations on Tokyo and Osaka.  For more on ANA, go to http://www.ana.co.jp/asw/wws/us/e/
Posted by albert from SGN at 9:26 AM

Wondeful article. I was recently visiting Seattle and enjoyed the tolerance and diversity. I was in from the South where that is usually missing. However, where I live in Houston there is a huge effort to modernize. Even our mayor, Annise Parker, is openly gay and former councilmembers like Rob Todd (who at one time sued the city over secual preference policies is now openly advocating for equality. I encourage your readers to read http://www.chron.com/opinion/outlook/article/Reputation-for-tolerance-gives-Houston-an-3395521.php
to get an idea of the way our city is headed, and how Seattle is one inspiration for that future.