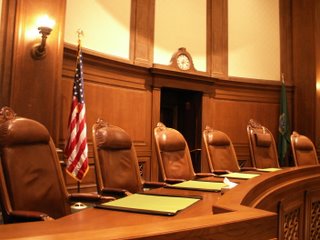 The Washington State Supreme Court denied a petition for reconsideration from the lawyers representing 19 plaintiff same-sex couples who sought the right to marry. The decision may represent the final word on the issue from a legal perspective for at least a decade, according to one legal scholar who spoke with the Seattle Gay News on Wednesday.

Supreme Court Justice Susan Owens confirmed the news during an interview with the SGN Wednesday afternoon (see the full interview in Friday's edition of the SGN). She urged the region's Lesbian, Gay, Bisexual and Transgender community to turn their attention to the Washington State Legislature, which has the ability overturn the state's Defense of Marriage Act. She also expressed hope for the future, saying that her children's attitudes and those of their peers reflect a shift in the culture's thinking about LGBT issues.

In a 5-4 decision on July 26, 2006, the court ruled to uphold the state's 1998 law, which bars same-sex couples from access to marriage. The rules of the Supreme Court dictate that parties have 14 days from the issuance of a decision to petition the court for reconsideration, however, the lawyers had been successful in receiving an extension before filing its motion with the court.

The lawyers had said at the time that they intended to "exhaust every possibility," that some "basic flaws in the courts reasoning" where being argued, and that "motions seeking reconsideration exists because of cases exactly like [theirs]."

The narrow decision last July revealed a diversity of opinion among the justices. "The Legislature was entitled to believe that limiting marriage to opposite-sex couples furthers procreation, essential to the survival of the human race and furthers the well-being of children by encouraging families where children are reared in homes headed by children's biological parents," wrote Justice Barbara Madsen on behalf of the majority.

Justice Mary Fairhurst, however, wrote that justices who upheld DOMA "condone blatant discrimination against Washington's Gay and Lesbian citizens in the name of encouraging procreation, marriage for individuals in relationships that result in children, and the raising of children in homes headed by opposite-sex parents, while ignoring the fact that denying same-sex couples the right to marry has no prospect of furthering any of those interests."

Eight of the couples where represented by Lambda Legal and the Northwest Women's Law Center in Anderson v. King County and the American Civil Liberties Union of Washington represented 11 couples in Castle v. State. The two cases were decided jointly.

Posted by Anonymous at 2:27 PM